Skip to content
Home » Blogs » 7GenGames » Throwback Thursday: No one should be discouraged from computer science

Going through our archives, we came across this great post by Dr. AnnMaria De Mars from March 18, 2014 “No one should be discouraged from computer science” that we wanted to share in case you missed it the first time around.

I read a blog post where the author said the women who dropped out of programming “should have been discouraged” because it’s not for everyone and many women try to use smiles and flattery to get men to do their work for them.

I actually have had the experience the author cites, but with both men and women. It’s true there are some people in the tech field who are very introverted or socially inept. They are willing to help you with your technical problems if you will just stop by and have a cup of coffee and chat with them.

Clearly, people who want you to do their work for them are annoying, however, I haven’t found them to be limited to one gender at all.  Lately, I’ve been wondering whether they are like that in SOME  cases because they don’t believe they can learn to do it themselves. I don’t know the answer to that.

What I do know, though, is that over the years I have known many people to succeed in areas I would not have given them a chance. Two very fine physicians that I know didn’t attend the best high schools, have the grades as undergraduates and honestly,  I didn’t think they had a prayer of  getting into medical school, much less succeeding. Neither got accepted in medical school the first year that they tried. People I would not have given the chance of a prayer in hell of becoming elite athletes have often gone on to surprise me, including a couple who won Olympic medals.

That advice is particularly true for programming. The last couple of days have been discouraging. We had our next install almost ready and then I found some bugs in it. Then we thought it was done, and I found some more bugs in it. The Invisible Developer is upstairs fixing those and testing the latest version. I am downstairs fixing his code on the next game (so much for women wanting men to do their work for them, and he is definitely a man. I can point to fact of having collaborated in producing The Spoiled One as irrefutable proof of said manliness. Photograph attached.). Actually, he’s brilliant and totally capable of fixing it himself, but he was already working on the other game.

Everyone’s code, if it is the least bit complicated, is going to have bugs in it. Sometimes it can take you days to find them.

Some days we succeed in writing quizzes where students can drag and drop answers, video clips with sound and animation play in response to correct answers with dialogue in English and Dakota, and then the student is transported back to a 3-D virtual world to continuing playing.

Other days, nothing happens. Just nothing. There are no errors in our consoles, just a screen looking obstinately back at us refusing to do what it’s supposed to do.

Programming is discouraging some days on its own and the LAST thing you need those days is someone saying,

“Maybe you’re just not cut out for this. “

I was complaining about how today had just not been productive, that I wanted to have the latest fixes on Spirit Lake in the hands of the teachers today but it wasn’t saving the game state frequently enough. While The Invisible Developer worked on that I found that some of the quizzes in the next build of Fish Lake were telling the student the answer was wrong even when it was right.

The Spoiled One said,

“Don’t worry, Mom. You’ll figure it out. You have time. Life is long.”

You know what? She was right. We figured it all out today. People should be encouraged. I’m proud of that she has figured this out at not-quite-sixteen. 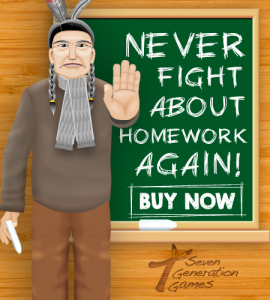