Going through our archives, we came across this great post by Dr. AnnMaria De Mars from February 17, 2014 “Somebody Else’s Dream” that we wanted to share in case you missed it the first time around.

When I get some time next year, I’m planning on writing a book on parenting with the title,

There are a lot of parenting books out there that tell parents how much we suck, either just in general or in comparison to other cultures, whether it is the French, Japanese, Chinese or whoever is supposed to be sucking less than us this year. I wrote about this a while back in response to a Wall Street Journal article saying that Chinese mothers are superior.

In fact, the title of my post two years ago was tongue-in-cheek. Not only do I not believe that any nationality has a monopoly on good parenting, two other titles I have considered for the book are

Nobody really knows what they are doing

Marching confidently through the fog

(I’m pretty sure a publisher would veto the last one as not obvious enough.)

It’s a bit ironic that two years ago when my blog post was re-posted on Tech Crunch a number of commenters said,

“Her daughter got admitted to Harvard. What have your daughters done?”

What bothers me about the books and articles exhorting us to have children start studying 10 hours a day from preschool until they score perfect SAT scores 15 years later, is that your children are living YOUR dream. Isn’t that everyone’s dream, to get into Harvard, go to medical school, get a job at Google and make a LOT of money?

Some people said they agreed with me that there is a difference between success and happiness, and while giving up sports, sleepovers and focusing on doing well in every subject, regardless of interest might make people successful, it won’t always make them happy.

In fact, my point isn’t only the difference between success and happiness but also that success isn’t only defined by how much money you make.

I think I’m fairly successful. My bills are paid, I’ve been able to support four children through education at private schools, I live in a nice neighborhood by the beach where it hasn’t snowed since the last ice age. There are people who are surprised when they come to our house and find we live in a three-bedroom townhouse and not a big house with a sprawling lawn. I find that interesting because how big of a place do three people need?

Watching the Olympics this week really drove this home. There are a lot of sports I had never heard of, and even though they were fun to watch – like skeleton – I would never want to try them. Yet, for some of those athletes, just being there was a success.

When I competed, I never understood those people who were just happy to be there, whether it was the world championships, national championships or the Olympics. I was there to win and would have considered anything less than a gold medal a failure. Lately, though, it has occurred to me that my attitude is no more rational than those people who consider me unsuccessful because I have chosen to spend my money on sending my children to the Olympics, NYU and USC rather than buying a Mercedes and a house in the suburbs.

Like those people at the Olympics, I have arrived where I wanted to be.

If my children can say the same when they are in their fifties, I’ll have been a great success as a parent.

Want more parenting content? You’re in luck, we have an ebook for that. Buy “Parenting Like I Know What I’m Doing” today! 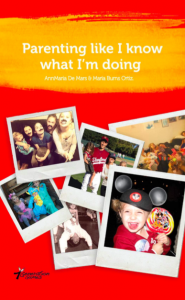