Going through our archives, we came across this great post by Dr. AnnMaria De Mars from December 18, 2013 “The Mid-Life Pivot (Don’t Call It a Crisis)“ that we wanted to share in case you missed it the first time around.

Perhaps people wouldn’t be so hesitant to change careers during mid-life if they paid a little bit more attention to start-ups. Having been in start-up mode for the past few years, I’ve read numerous articles with titles like,

(Okay, well, maybe I made up that last one.) How does start-up advice apply to mid-career switches? One piece that resonates with me is,

Accept that the company you end up with will bear little resemblance to the one with which you started.

7 Generation Games is a company that sells adventure games that teach students math. Our focus is upper elementary and middle school. The games are historically accurate, with consultants from the Spirit Lake Dakota Nation and Turtle Mountain Chippewa.

Four years ago, I wanted to create an online program to teach statistics to community college students. I had a lot of cool ideas about routing students to instruction based on the right or wrong answers they gave. Here is what happened – the district administrators I talked to said that they really needed a program to intervene earlier. In many areas, there was a lot more political pressure for public K-12 schools to change than at the community college level. In short, there wasn’t nearly as much market demand for what I wanted to do as for something else in the area of using technology to teach mathematics.

So, I did what most start-ups do when they find the market isn’t there. Pivot. If you’re finding a lack of demand for your skills in the workplace – the job openings for word processors, administrative assistants or middle managers are just not there anymore, then maybe you need to think of yourself as a start-up. As Tom Peters calls it, You, Inc. There is also a really key lesson here for mid-career shifts. Notice I did “something else in the area of using technology to teach mathematics”. I love math and programming and I don’t think I would be happy in a career that did not involve those two things.

Similarly, we hired a Chief Marketing Officer who had a decade of experience in journalism. She’d probably be bored programming and hate it. She writes most of the company blogs, our marketing materials and press releases. Since we’re a small company, she also lends a hand co-authoring grant proposals and scientific reports and writing scripts for some of the instructional videos.

The keys to a successful pivot, whether you’re a person or a start-up, are

The intersection of those three is where you want to be. I’ve had people argue with me about each of those points, but I’d argue right back.

If you really love it, a market shouldn’t matter – Um, no. Maybe if you are independently wealthy. If there isn’t a market, maybe it’s a bad idea. Maybe no one really needs embroidered toaster covers. If you can’t make a decent living at it, it’s a hobby.

It doesn’t matter if you love it. Scott Adams of Dilbert fame said that his boss advised against loaning money for someone’s passion, because passionate people aren’t objective about the bottom line. There’s some truth to that, but it’s also true that if you love what you are doing, you’ll stick with it long enough to make it through what Seth Godin refers to as The Dip. In our company, that was a period of several months when the founders worked without pay as we developed our first game. For students, it can be that middle of a graduate program when the excitement of starting has worn off, graduation seems a distant haze and final exams loom right around the corner. If you really love providing health care, teaching or whatever your field, you’ll power through. The other reason it matters if you love it is that you only get one life. I spend 3/4 of my waking hours in my office. I want to spend them happy.

LISTEN CAREFULLY – when I started programming in javascript and PHP I wasn’t all that good at it because I had just started. No one begins as an expert and too many people give up because they aren’t immediately good at statistics, writing lesson plans or taking someone’s blood pressure. What they don’t seem to comprehend is that none of the people to whom they are comparing themselves started out that good, either. Maybe you’ll even fail a course. Let’s hope not, but it happens. Dr. Erich Longie, a friend of mine who was tribal college president, gave this talk to many students:

So what if it takes you five years or even seven years to get your degree? When you walk up to graduate and they hand you that diploma, it’s not going to have a note on the bottom, P.S. It took him seven years. You’ll walk across that stage a college graduate.

Our company didn’t take off making educational technology in 2011, but we’re doing it now, and that’s what matters.

Let us help you with your holiday shopping. Check out the value packed into our Level Up Holiday Gift Box! 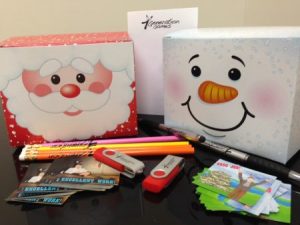