Skip to content
Home » Blogs » AnnMaria » Throwback Thursday: What If You Took the Other Fork in the Road?

Going through our archives, we came across this great post by Dr. AnnMaria De Mars from December 30, 2015 “What If You Took the Other Fork in the Road?” that we wanted to share in case you missed it the first time around.

I usually only read poetry when threatened, as in “I will flunk your sorry disobedient ass if you don’t read this poem” – and often not even then, as witnessed by the F I received in English during my three weeks before I was expelled/ dropped out from Alton High School.

One of the few poems I actually like is by Robert Frost, The Road Not Taken, which ends:

I shall be telling this with a sigh
Somewhere ages and ages hence:
Two roads diverged in a wood, and I—
I took the one less traveled by,

And that has made all the difference.

Most of us encounter forks in the road. The past three days I have been in St. Louis, MO where I have done some social activity every night, meeting up with 37 different relatives (that is an exact count, not an exaggeration), some of them more than once, and an additional 23 boyfriends, old friends, new friends and random people who wandered in. 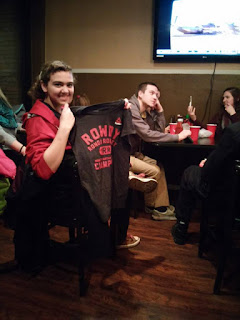 I moved away 39 years ago to spend a year in Japan. Then I came back to finish my senior year of college and moved away again.

What would it be like if I had done like many of my friends and family did – graduated from college and stayed put?

What did I miss by leaving? It’s nice to have family around. Everyone asked about Ronda, but they also asked about the other three daughters, their husbands, the grandchildren. It’s a different experience being around people who knew me when I was broke, single, not yet a college graduate, not yet a lot of things.

No one has to impress anyone, fill anyone in on a back story or history, because they already know it – what your parents were like, how many cousins you have, when you got divorced.

Even if they think you are a bit of a pain in the ass, they are at least civil to you because, as Frost said in another poem,

‘Home is the place where, when you have to go there,
They have to take you in.’

Okay, that has about exhausted all of my knowledge of poetry.

I was talking about this tonight with my friend, Laura, who I have known since high school (how crazy weird is that?) She pointed out that if I had never moved away, I would definitely not have ever met Ron. I wouldn’t have had Jennifer and Ronda. I wouldn’t have met Dennis and had Julia. It’s highly doubtful that I would have started a gaming company. I wouldn’t be working with people on three different American Indian reservations.

In short,  I would be a different person.

The way you choose to go, determines who you are – to an extent.