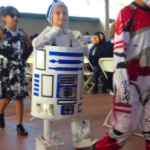 The Force is strong with this one.

Last year, I missed my daughter’s Halloween costume contest. I wouldn’t say it seemed like a “big” thing, but it was a thing. Halloween at her school features a class-by-class parade and all the kids march around in their costumes, with a costume contest where they select winners from each grade. I had gone to her previous school costume things – both at this school and her previous schools – but last year’s carried a little more weight because she was determined to win and had fashioned a snow globe costume and everything.

However, I was in Salt Lake City preparing for our accelerator’s Demo Day, so I missed the costume contest win. Last fall was an especially busy time as far as me missing things because in addition to the general (seemingly constant) travel that I do as 7 Generation Games CEO, I was also back-and-forth between Salt Lake City at least every other week. And I did feel slightly guilty – I brought back so many toys that we owed every incarnation of Beanie Boos that they sold at SLC airport. While I wasn’t losing sleep overcome with guilt over not being able to be there, I did feel bad that I couldn’t be there.

Well, fast-forward to this year, and having just returned from Tech Inclusion last week, I’m actually in town for the Halloween contest to see her go for a repeat. Then as we were getting ready for school this morning, when Eva mentioned how I had been at the contest last year.

Me: I wasn’t there last year, but I’ll be there this year.

Eva: You missed the one when I was in first grade.

Me: No, I was there when you were in first grade. I missed the one last year.

Me: Yes, remember I was in Utah – when you were a snow globe. In first grade, you were Frozen and I was there. 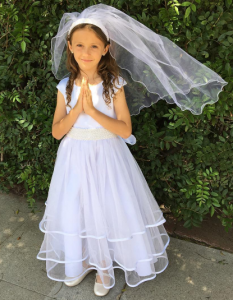 First Communion (or other major religious events) falls under the “Can’t Miss” category.

Now, look, there are definitely things that I would put in the category of cannot miss, but it’s a relatively short list: the very first day of school (as in like kindergarten – I actually missed Eva’s first day of second grade last year), First Communion, the state soccer finals where it comes down to them to take the final shot (come on, that always happens in made-for-TV movies), high school graduation and maybe a couple other key dates in there, but my point is, it does not include every holiday party or athletic event. In an ideal world, you want to be able to attend as many of your kids’ things that matter to them as you can – but sometimes you can’t. Maybe a lot of times you can’t.

But before you feel guilty about it, just realize that sometimes the things that you feel slightly bad about not being able to be there for are things they won’t even remember a year from now.

Oh, and in case you’re wondering, yes, she did win again!

And since it’s Halloween, we’ve got a treat for you: Making Camp, the first iPad app from 7 Generation Games, is available free in the App Store! And you can get all the other awesome games we make here!