What is the deal with expecting things for free? I mean I get people don’t want to pay for stuff, but I am really shocked over the amount of time in my professional career that people have asked me to do my work for free.

So I just submitted a 20-page single-spaced article to an academic research journal. It’s the kind of thing that grant-giving agencies like to see, the whole “Has your research been published anywhere?” Now, I can actually say yes. Well, in like another nine months I’ll be able to say yes. And you know how much I got paid for it? NOTHING. And this is by no means a dig at the journal. In fact, at least in the case of this journal (which is peer-reviewed for all you academic types), it’s an open source journal, meaning anyone can access it for free. That’s not the case for a lot of other academic journals where they don’t pay the people who write for them and then charge an ungodly amount to anyone who wants to access the content that the journal itself paid nothing for. And yet thousands of academics write papers for journals like these around the world compensated by only seeing their names in print. (Even more crazy, people write up these papers for free only to get them rejected and have literally nothing to show for the efforts.) 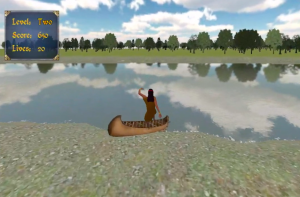 Instead of writing a bunch of journal articles, we’re making games that look like this.

We don’t do a ton of journal articles at 7 Generation Games – and the fact that we don’t get paid for that is a big reason why. We’re a small startup with a staff that’s juggling multiple assignments on multiple projects at any given moment. Given the choice of writing a research paper or creating better games, we pretty much always pick making better games. [PLUG: Buy 7 Generation Games here, they’re awesome!] We’ve got a small staff and we’re running on a lean budget ($1 million doesn’t go as far as you might think in the world of game development). Taking time off to do the necessary lit reviews, data analysis, writing and rewriting takes away from the time we spend on our games. And it also doesn’t fit with our company policy of believing that any work of value is work you should be paid for. That’s why we pay our interns (starting at $10.50 an hour – even our high school intern this summer).

As I was writing my article, I couldn’t help but think about how many times in my journalistic career, I was asked to write for free or “for exposure” (which is basically what academic journal articles offer). But exposure – as far as I know – has never paid anyone’s bills. In fact, when I taught introduction to journalism, I would discourage students from writing for free. And it’s because I learned – having had a front seat for the downfall of print media (shout out to my fellow Knight Ridder alums!) – that if you start giving your work away for nothing, then people will never think they should pay for it. And if there’s any value to your work, then – going back to our internship policy – you should be paid for it.

And then whole expectation that you should be giving your work away for free is one that we regularly encounter at 7 Generation Games, where we have sold our games from Day 1 as opposed to giving them away for free. Sometimes, people don’t like that. I’ve had teachers come up to our tables at booths and ask if our games were free only to walk away the second I say they’re not. 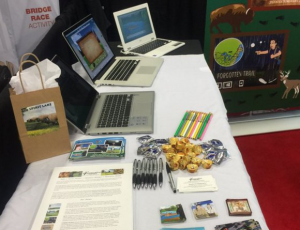 If you come by our table at an event, we will be happy to give you free pencils and stickers and candy and other swag — but not the use of our products for no cost for perpetuity.

“Oh, well, I’m not going to use anything I have to pay for,” I’ve heard more than once. When you phrase it as “I’m not going to pay for your work” which is basically what that statement is, it’s crazy. Those same teachers expect to be paid for the work that they do. If they ate at a restaurant, they wouldn’t balk twice at paying the bill a server brings at the end of the meal. Think about it. You’d pay a mechanic who fixes your car, a doctor who gives you a checkup, for the shoes you buy at the shoe store. But suddenly, when it comes to games there is an expectation that it should be free. And it’s not just teachers (this is not at all a dig at teachers, we love teachers!), it’s parents too – and at a larger level, so many of us who have gotten so accustomed to using the digital products someone creates without having to pay for them. And then we complain about the quality of the product or lack of features or when one of those companies goes out of business.

Look, I know teachers are underpaid (we’re not even talking about it coming out of their pockets in these conversations – although we have priced our games so that they fall within the discretionary classroom budgets of most classrooms that have one), and I know the school buying structure is a headache. And I know a lot of people don’t want to pay for apps or news or academic journal writing (in part because they never have and there’s so many free options out there). But at the end of the day, there’s a reason why I pay for online access to the New York Times. It’s the same reason why the best quality kids apps on my phone are the ones I “splurged” and spent the whole 99 cents or $2.99 to buy. And it’s because you generally get what you pay for something.

Unless, of course, you’ve just received a 20-page single-spaced journal article written by me for free – in which case, you’ve gotten a super amazing deal.