Now I am not a famous mathematician. In fact, I’m not even a mathematician, but I have decided I’m not going to let that stop me from adding to the renown body of work shaped by those who came before me. In fact, if we were making a list, I would advocate that I should be placed before Euclid, Fibonacci and Pythagoras.* 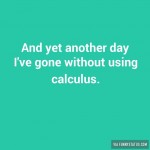 You know how people will occasionally sarcastically say, “Another day, and I still didn’t use Calculus”? There’s the related, “Another day, and I still didn’t use algebra,” but I’m ignoring that because, actually, you probably did use algebra, but just didn’t realize it because the world isn’t set up in neat little equations. (This fact is why 7 Generation Games presents our in-game math problems as applicable real-world situations.) [I would also like to add that I once mentioned how I regularly use statistics, but as far as I could tell virtually none of what I learned in Calculus to one of our developers, who actually said that she uses Calculus maybe not daily, but pretty often.]

However, this is a formula that people will still be using a millennium from now on a regular basis– in fact, if you have kids, you may already be using it and not even realize it.

It’s a theorem that I have been working on since April 2008 with significant advancements in 2012 and 2015. I initially cited my early findings with a little background on some of the initial research on my personal website’s blog (I use the term loosely as I have updated that site maybe twice in the past two years), but after testing and confirming my findings over Spring Break, I feel confident sharing them here.

It is the Burns Ortizian theorem for how long it will take you to get anywhere with young children.

It follows as such:

When X = number of minutes it takes to get to a location and K=a child under the age of 10, the following is true: 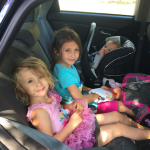 You might think it would only take 3 seconds to walk out of the house and get into the car, and yet it took us 45 minutes.

That is where my work on the formula ends, but like all great mathematicians before me, I present my findings so that others may build upon them. (Full disclaimer: I run the business and creative sides of a math video game company and am not even close to being a great, or even not so great, mathematician.)

However, based on my initial work, I have been able to conclude that:
Going somewhere with 4 K = 10,431X
Going somewhere with 5 K = 109 X (The fact that there is an exponent here makes it math official.)
Going somewhere with 6 K = Ξλ X (I felt like we needed some Greek letters here, and let’s be honest, anyone with six kids under 10 isn’t going to have time to read this post anyway. At this point, I’m really just making things up.**) 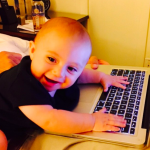 He’s not helping me with my work nearly as much as he thinks he is.

And there’s more. During the 10 days, my children had for Spring Break, I discovered that my theorem is not only valid for calculating time to get places when you have children, but it also is accurate for calculating how long it will take you to get work done when K = children under the age of 10 who are awake and who you are not allowing to just watch iPad all day. (This explains why I only manage to update my personal blog once every two or so years.)

Now, that I’ve shared this amazing mathematical discovery with the world, I am going to get back to making math video games while I wait for my Fields Medal.

* If that list was done by alphabetical order and you alphabetized my last name by “Burns Ortiz” instead of “Ortiz.”

** Disclaimer: Actually, I made up (more like guessitmated) all of the math here, but if you want to check out some real math, get our games!