Students struggling in math is not merely a U.S. issue. We knew that when we started 7 Generation Games, and it’s why going global has always been part of plan.

Just like we did when we started in the U.S. market, as we make that next step, we wanted to expand into a market that wasn’t seeing its needs met. As we’ve said from Day 1, our goal is to make educational games that run optimally under any conditions – whether that’s in an urban, high-tech environment or a remote, network-limited community. We wanted to create games with characters that reflect the communities where they’re being used. And more than anything, we wanted to create games that improve student math scores.

Over the last year, it’s become incredibly clear that the Caribbean would be a logical next step. I’m excited to announce that last week, we made several strides forward. I got back from what can only be described as a whirlwind three days in Trinidad & Tobago and Guyana of interviews, government ministry meetings and more. 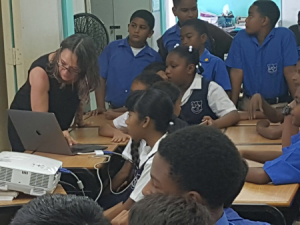 I could not be more appreciative and inspired by the reception 7 Generation Games received in Trinidad and Tobago. Since our initial conversations about expanding into the Caribbean, we truly believed that T&T is where we wanted to start. The country has everything we could want – from an airline hub to the rest of region in the form of Caribbean Airlines to basic hardware and network needs to a real commitment at the government level to improving education.

That was important to us, because just as we have with every community we have in our games, when we talk about expanding, we’re not just talking about coming in, selling some games and peacing out. We wanted to set up a Caribbean headquarters, out of which we would sell, market and customize our games in conjunction with our U.S. and Chilean operations. 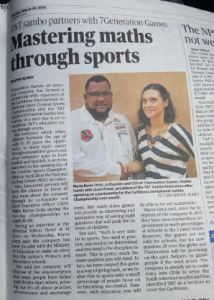 I had gone to Trinidad to meet with Jason Fraser, a driving force in 7 Generation Games’ Caribbean expansion. In his role as head of the T&T Sambo Federation, Jason had asked 7 Generation Games to partner with his Ruff & Tuff MMA promotion’s upcoming international event on April 28-29. The goal, Jason said, in partnering with us was to bring an educational component to the event, which counts the Trinidad & Tobago Ministry of Sport and Youth Affairs among its sponsors.

“The career life of an athlete is incredibly short,” Jason told me when I asked why he was interested in what many might see as a not-so-obvious partnership. “So often, we have athletes that neglect their education and don’t have anything to fall back on. I think the work 7 Generation Games is doing can be a part of helping change that.”

We completely agree – and his invitation came at a perfect time as we are already rolling out our “Strong Bodies, Strong Minds” campaign stateside next month. As part of my trip, I had the opportunity to meet with the Minister of Sport and Youth Affairs to tell him about 7 Generation Games.

Since Jason and AnnMaria first met in March 2017, he has been T&T’s biggest advocate to bringing our games to the country. He became convinced of it having seen the reaction to local students playing our games. The more we spoke, the more we believed we could make this next move not just a reality, but a success. Jason’s expertise in building businesses in the region (including successfully founding a tech-centered company that works through CARICOM, a coalition of 15 Caribbean nations) was exactly what we needed to enter the Caribbean market. It’s where so happy to have him joining as the head of our Caribbean operations. 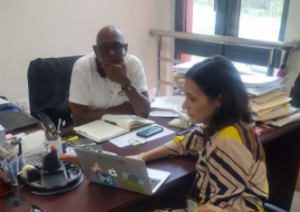 Our conversations with Jason had always been about more than just a single event. The goal is to bring our games to the entire country – and from there, the entire region. We were incredibly fortunate to get a meeting with Mr. Anthony Creed, who in addition to being the Executive Manager for national Sports Company of Trinidad and Tobago brings decades of experience in education, including with the Ministry of Education. Before our meeting had ended, Mr. Creed had helped arrange a meeting with the Ministry of Education for the next day.

That meeting beyond exceed our expectations. Jason and I had hoped to merely meet with Mr. John Roopchan, Director of the Curriculum Division for the Ministry of Education. But what showed me that the country is truly looking to find innovative solutions was that he wasn’t simply taking the meeting out of courtesy, but with a real commitment to learning about 7 Generation Games, bringing together curriculum coordinators from across departments including math and I.T. 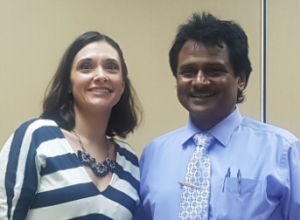 Meeting with Mr. John Roopchan of the Ministry of Education.

The level of genuine interest that I saw from all of my meetings with ministry officials – both within Youth and Sports and Education – was incredible. The questions asked were not just the standard “What does it do? What devices does it run on? What efficacy data do you have?” But thoughtful, insightful questions from people clearly intent on improving student performance in math through new approaches. It could not align more with our goals at 7 Generation Games.

We discussed everything from the fact that it was culturally customizable (including redoing artwork, narrative storyline, history content and voiceovers to be reflective of T&T) to adapting the games so that they aligned with the nation’s SEA tests instead of Common Core (which would be something we could easily do) to how our games can continue to run even if an connection drops out (there’s nothing worse than a classroom full of kids suddenly unable to to access the educational software because Internet cuts out midsession, that’s not an issue with our games).

As a former journalist, I was further encouraged by the reception we received in the media. I had a chance to talk about our games – in newspaper, radio and TV interviews. From a one-on-one with Andre Errol Baptiste (who is known as “The Fearless One” due to his no-nonsense interviews) to an article in the national Guardian newspaper to a live morning show appearance on “Morning Education,” the response was overwhelmingly positive. But perhaps nothing inspired me more than the calls we got once we got off air. The morning show had broadcast our local office number as part of the show. Before we had even walked out of the building, we had our first call for more information – and the phone kept ringing throughout breakfast.

“Is this something you think we need here?” Jason asked every caller.

“I think it’s an incredible idea,” another told him. “It should be support by every constituency.”

“It would not only be great for schools, but also the Police Youth Clubs,” one said.

I had arrived in Trinidad and Tobago hoping the market could be a fit. I left fully convinced it is. We can’t wait to roll out 7 Generation Games nationwide.

One thought on “Going Global: Establishing Our Caribbean HQ in Trinidad & Tobago”