We had someone write us a harshly worded Facebook message the other day, excoriating us for using this image. 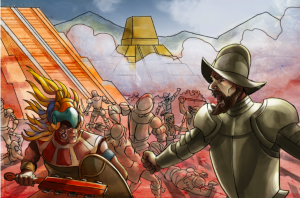 They were appalled, apparently, that in AzTech – a series of games about Central American and U.S. Latin American history – we would include the conquistadors. Now, mind you, the game in which this artwork appears is not even released, so this person wasn’t upset about our portrayal of the Spaniards upon their arrival in the Americas. They were angered by our acknowledgement of what happened in history actually happening. 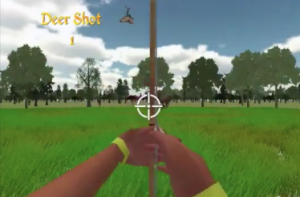 It’s surprising how often we actually encounter this issue. For example, the woman who asked if instead of the Ojibwe hunting deer in Fish Lake, couldn’t they just be “friends with them”? Now, aside from the fact that the Ojibwe used the deer for everything from meat and clothing to baby rattles, arrowheads and fishhooks, there’s also the fact that changing the historical narrative from Ojibwe hunting deer for survival to Ojibwe just hanging out in the meadow picking wildflowers together does a disservice to the facts. While that may seem eye-roll worthy, we’ve come up against it on more serious storylines as well.

In all of our Native American focused games, the narrative perspective is from the Native characters – which has also gotten some folks riled up. There’s the part in Spirit Lake where Hoksinato overhears the soldiers talking about raiding a Dakota village and he needs to get home and tell his people.

“You portray the U.S. soldiers of plotting to attack the tribe – vilifying our country’s armed forces!” someone heatedly told me.

“But that happened,” I said.

“That’s not the point,” he replied. 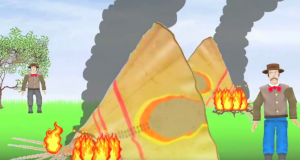 Actually, that is the point. History is in essence a documentation of facts. Now, as we lay out in AzTech: The Story Begins, often those facts are interpreted through different lenses and perspectives that might paint stories very differently. However, at the core, when we step back and put aside the “interpretations,” we can usually all agree on some basic facts. Things like the conquistadors’ arrival happened. Or that the U.S. government through military efforts, among other things, decimated the Native population.

In the often quoted words of George Santayana, “Those who cannot remember the past are condemned to repeat it.” The reality is history, for all of its progresses, is also filled with atrocities. Do we act like none of those ever happened? If we take that approach, then how do we prevent future horrors from happening? Without acknowledging the circumstances that brought us to where we are, how can we work to remedy the consequences and fallout – even centuries later – that negatively impact our society to this day? There is nothing we can do to change the history of the past, but if we fail to acknowledge the mistakes of the past, we are only leaving that road open for us to potentially travel down again someday in the future.

History is far more nuanced – and often far more brutal – than is taught in schools. One of the things we internally discuss is how to convey some elements of history in an age appropriate way. But one thing that will never be up for discussion is acting as if history didn’t happen simply – because it makes us uncomfortable. At least at 7 Generation Games, that’s not how history works. 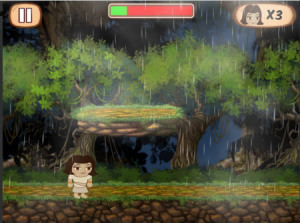 At 7 Generation Games, we make educational video games and apps that combine real-world applications of math with elements of history and language arts. Check out our games!