We here at 7 Generation Games are never satisfied with just satisfactory. To prove this point I’d like to talk some points about constantly improving.  As a veteran web developer here 7 Generation Games, I’m given some leeway into creating content for our website and our games. After being inspired by a family board games night, I decided to take on the endeavor of creating a chutes and ladders style of game for future content. After a few days work I was able to create a fully functional game. This picture down below is my finished masterpiece. 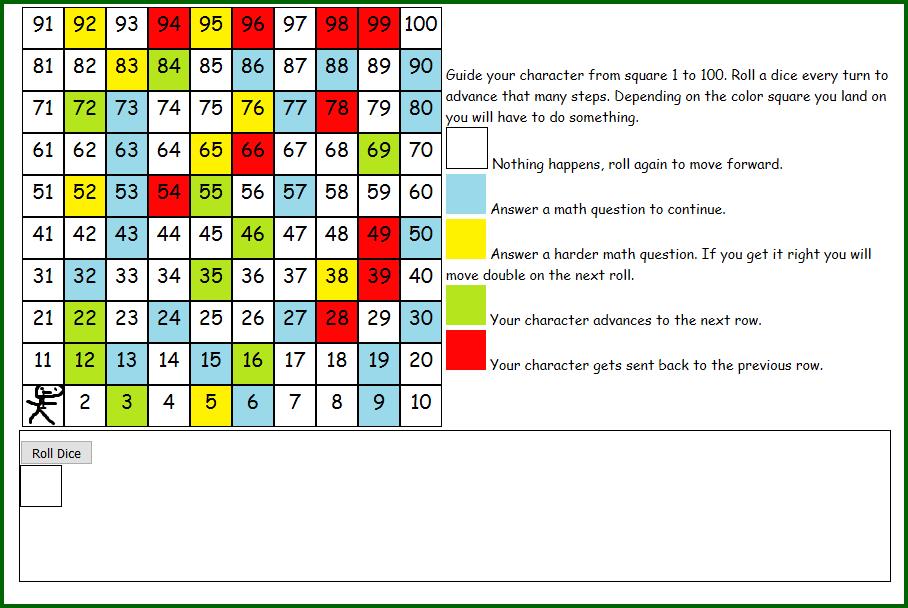 Other than my stick figure masterpiece(which I planned on replacing with something more practical), I thought I created a fun game which will give any player a good time. Everyone in the company who I showed it to loved it. However we all had the same thought about the game in the end… “how can we make it better?”

To do this I put on my thinking cap and thought about how to make this even more fun and playable than it already is. If you took a look inside my brain at the time, it would say “MAKE IT INTO A STORY”. Excuse my brain, it thinks in caps lock when it has a good idea.

So taking a page from Forgotten Trail I decided to use the protagonists from the game to create a purpose of going from 1 to 100. Our two characters need to climb a mountain to go sledding! With two characters comes…drum roll…a choice of characters. A choice between a girl and boy character adds a means to relate yourself to the protagonists. Add some awesome imagery and fun sound clips and you got yourself a new and improved game.

This picture only gives a small taste of the game. Look for it in the near future on our Summer Site or in the next update of Forgotten Trail.

Not only did I improve the looks of the game I also went to improve the code behind it all. One of the main aspects of the game is to answer a math question to progress in the case of landing on particular squares. The way I first programmed it was by having a random number generator generate a number between 1 and 100 and pick one of 100 pre-written problems for the user to answer. Having these 100 pre-written questions in the code is a lot of code space being used. To improve upon this I used the same random number generator to generate a random question. Now we only generate two numbers and use that as the question. Here is a snippet of that code.

I count 7 lines of code. These 7 lines replaced an upwards of 400! Now that’s what I call improvement.

This is just an example of striving for more. This game in all honesty can still be made even better and I do plan on returning to update it. However there are other things I am looking forward to create and update for now. My mentality of striving for more is something that is preached here working for 7 Generation Games. AnnMaria herself constantly returns to older games and minigames she has created to fix them or make them even better. She also has a great staff who shares her passion of creating the best content that we possibly can.

One thought on “How We Continually Strive To Improve”