Skip to content
Home » Blogs » Start-up Diaries » Intern Diaries Part 4: 5 things every intern should know about working at a start-up

I have been working ever since I got my first job at a tennis club snack-shack when I was fourteen-years-old. I have had jobs everywhere from snack-shacks to film production companies, but 7 Generation Games is the first start-up I have worked at and it’s a definitely a unique experience. Here are 5 things every intern should know about working at a start-up for their first time. 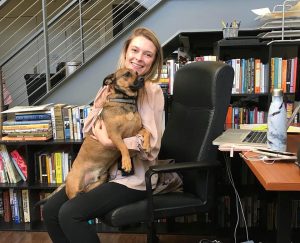 At my last job for a film production company, I had my own office. I thought I was pretty cool at first, but after a while it got pretty lonely. Although I got to know my boss, I didn’t get to work with any of the other interns. At 7 Generation Games and other start-ups as well as tech companies such as Google, the office is physically aligned to foster collaboration. If I want feedback on an idea, I always have someone next to me to talk to. Maria and AnnMaria are currently collaborating on a parenting book!

2.) You have to be able to work independently

Despite the collaborative work environment, the majority of my work is done independently. For some of my other internships, my bosses would give me a list of things to do each day. At 7 Generation Games, I make my own schedule. Of course, there are still things I have to get done, but I can be innovative and design my own projects. Learn about some of the work I do here.

On my first day of work, I wore a silk button up shirt, slacks, and flats. I stood out like a sore thumb. No, my coworkers weren’t dressed in their pajamas, but they definitely looked more casual than I did. But at the same time, everyone was still highly professional. Despite the casual environment, an unprofessional attitude will never fly. (If I had read their Family Text-Book beforehand, I would have already had an inside scoop on 7 Generation Games’ work environment.)

4.) You’re not going to have the strongest tech skills in the room

Most employees like millennials because they are impressed with how we are not only comfortable on the computer, but can learn new software quickly as a result of growing up using computers. But working at a start-up, especially one in the tech industry, these basic skills are just expected. At 7 Generation Games, I am surrounded by software developers and people who have been coding for years, such as AnnMaria, who is always looking to improve her programing skills and probably currently coding while drinking Pisco Sour in Chile right now.

5.) You get to work with people who are passionate about what they do

Those who have successfully started start-ups had a brilliant idea that they were passionate about and worked from the bottom-up to make it a reality. As a result, you can really feel (or at least I can at 7 Generation Games) how important the work that they do is to them, both on a professional and a personal level. Since 7 Generation Games is a female founded company, AnnMaria and Maria are dedicated to making a difference for women in tech.