Skip to content
Home » Blogs » 7GenGames » Josh Rosen Says ‘Football and School Don’t Go Together,’ We Disagree
7 Generation Games recently launched its “Strong Body, Strong Mind” program for youth sports clubs to help student athletes ages 8-14 build their minds along side their bodies. We created this campaign because too many athletes are neglecting school for sports. Young athletes are often told that they have to pick between academic and athletic success.
For instance, here’s what Josh Rosen, my school’s (UCLA) previous star quarterback and a top pick for the next NFL draft, had to say regarding his take on the relationship between school and sports:

“Look, football and school don’t go together. They just don’t. Trying to do both is like trying to do two full-time jobs. There are guys who have no business being in school, but they’re here because this is the path to the NFL. There’s no other way. Then there’s the other side that says raise the SAT eligibility requirements. OK, raise the SAT requirement at Alabama and see what kind of team they have. You lose athletes and then the product on the field suffers.”

Too many student athletes are coming into college with a mindset similar to Josh Rosen’s.

Yes, it is true that being a student and a college athlete at the same time is a huge challenge. The reality is that many college athletes – particularly at Division I programs – likely feel forced to spend the majority of their time focusing on their athletic success, rather than studying for their classes. However, neglecting their minds for their bodies has serious consequences for their futures, particularly for those athletes whose athletic careers end after they graduate college.

When, in fact, less than .01% of athletes continue to play their sport at the professional level.

I was once assigned to be part of a group project with all women’s soccer players. I did an entire project meant to be divided between six people on my own. I understood that since it was soccer season, my teammates’ primary focus was on winning on the field, not in the classroom. But since I stayed up until 2 in the morning doing my teammate’s parts, I walked away from the class with so many new skills while they learned nothing.

When Maria visited Trinidad and Tobago, the head of the T&T Sambo Federation, Jason Fraser, asked 7 Generation Games to partner with his Ruff & Tuff MMA promotion’s international event because he was aware that many athletes don’t have an education to fall back on when their athletic careers are over.

While I don’t agree with Josh Rosen that sports always have to come before school, he addresses an important point that many elite college athletes’ SAT scores tend to be lower than non-student athletes. Part of the problem is that these athletes have been told their whole lives that their sports careers are more important than their academic ones. That’s why athletes need to be shown at a young age that a strong mind is just as important as a strong body.

In fact, AnnMaria won a world championship and she has PhD in statistics and educational psychology. By launching our Strong Body, Strong Mind campaign, we want to show young athletes that football (or whatever sport they might play) and school can go together. 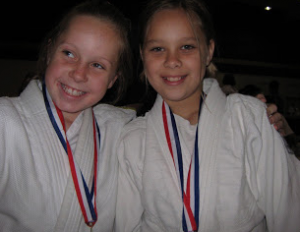