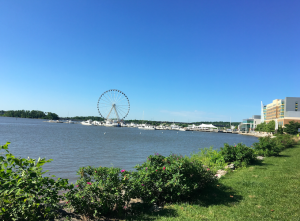 While AnnMaria and her reluctant assistant Julia are off touring the upper Midwest for the next two weeks, I’m on a mini-7 Generation Games road trip hitting up the greater D.C. area. I’ve been lucky the last two months in that I have actually been home – as in my real home, not LAX, during stretches, I’ve felt like I spent more time at the arrivals and departures gates than my home where I live. That said, building a company can’t be done from merely sitting at your desk, so I’m back on the road.

Now, over the years, I have developed some travel rules – one being avoid layovers at all costs (sometimes, for example, when flying to North Dakota, that is impossible), another being ALWAYS fly into Reagan if you’re going to D.C. Booking this trip, it was clear I’d have to choose between one of those two. I went with the layover in Dallas. Of course, just as I pulled up to LAX, I got the flight delay alert. Then a second delay notice 20 minutes later. Suddenly, my 55-minute transfer window was going to be cut to about 10. I ran a Twitter poll from the runway – because why not? – as to if I’d make my connection. The people of the Internet were split 50-50. So was I. 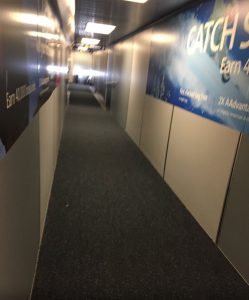 Fortunately, our pilot did that whole “we’re going to go a little faster and see if we can make some time up in the air” thing (where you wonder, why don’t you just always do that) – and we landed with what looked like might be enough time. However, I soon discovered were literally as far from my connecting gate as possible – and because “everything is bigger in Texas,” that meant I was a long way away. Fortunately, running track up through college and chasing after three small children in recent years gave me an edge as I rushed to the gate – just as it was about to close. Hooray for being the last person on the plane! (Sorry to the guy who thought he was going to get an aisle seat.)

From there, it was on to DC. Since things are never easy, my first day of events – the national SBIR conference – wasn’t technically in D.C., but more the “greater metro area,” like 10 miles away in Oxon Hill, M.D., much to my sighing cab driver’s dismay. It’s that not-far-enough-to-be-a-huge fare, but not super close and convenient distance. But 10 hours after leaving home – fueled by just 2 bags of airline pretzels since leaving my house – I made it to my hotel around midnight. I FaceTimed my kids and headed to bed. 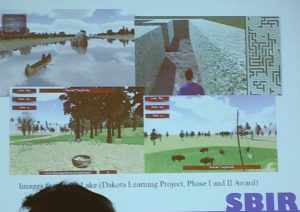 Day 2 came early – because, I’m on the East Coast, so it’s three hours earlier. (I’m serious when I say one of these days, I’m going to have a conference on the West Coast and have it go until 9 p.m. just as pay back for all the times I’ve had to get up when it’s pre-dawn according to my internal clock). But I got up and even put on a suit (because it’s D.C. and D.C. people love suits more than any other demographic I can think of) and headed over to the SBIR/STTR national conference. [If you’re wondering: SBIR stands for Small Business Innovation and Research, while STTR is Small (Business) Technology Transfer.] There I met with a bunch of people – both schedule and impromptu meetings (those can be the best kind!) – to talk about potential grant funding, additional possible uses of our games, ways to scale our company, etc. It was very business-y and not like fireworks exploding exciting, but super worthwhile. I attended the session on SBIR awards fostering edtech innovation – where our games were mentioned, so to me that was very exciting. 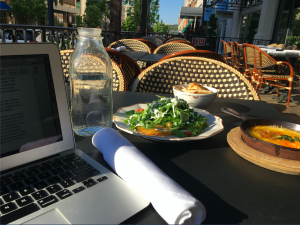 After the conference concluded for the day, I realized I should probably eat because all I had in 24 hours was the aforementioned 2 bags of pretzels, a Drumstick (the ice cream – not the chicken – kind), a mini-bag of popcorn and coffee – which seems like a quintessential road trip diet. With actual D.C. as my next stop, I figured I would wait out traffic with dinner in Oxon Hill. I wondered around a bit, enjoying actually being outside and stopped at a place that was Southern-ish, which basically sums out what I think about D.C. It’s not the South, like Tennessee and Georgia, but it’s under the Mason-Dixon line. With dinner out of the way, it was time to head to my next stop.

I expected a ton of traffic, as had my taxi driver, who unlike my silent, sighing driver the night before was super chatty, telling me that although he’d never been to California, people from California are the best people in America (obviously) and showing me pictures of his baby. But we were pulling up to my next stop before I knew it.

It turned out, fully unrealized by me when I booked the room, that I had actually been to my hotel before. I had selected it based on proximity to the Library of Congress and the National Museum of the American Indian. It was the very hotel that AnnMaria, Erich Longie and I stayed in when we were out for our very first Phase II commercialization meetings almost four years ago in the Fall of 2013. On that trip, Erich and I also went to the Library of Congress and spent hours, sifting through the archives, just like I plan on doing tomorrow. When I think of that trip, it seems like ages ago. I wouldn’t even say we were truly a game company then, more a small group of people with an idea we thought could be big. And now I’m back here – at the exact same hotel – and we’re definitely a game company, and our idea is actually a growing line of games. How far we’ve come since then!

That’s all for my dispatches from the road so far. Until tomorrow!

But you don’t have to wait until tomorrow to get our games, in fact you can buy them right now, right here!