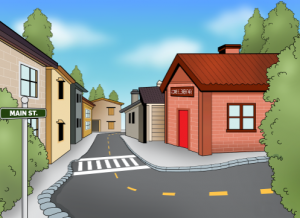 “Crossroads” is funded by a SBIR award from USDA.

You have a choice. That’s the message behind “Crossroads: A Game of Choices,” a new video game being developed to teach healthy decision making for children of parents struggling with addiction. It seems like a simple message, but it is one kids in these difficult situations do not hear often enough.

Developed in partnership between the Three Affiliated Tribes’ Circle of Life drug rehabilitation centers in Fort Berthold, N.D. and 7 Generation Games, the project received a $99,000 federal grant to develop an educational video game that seeks to help break the vicious cycle of addiction focusing on empowering youth in families effected by methamphetamine use.

For over a decade, rural communities have worked to combat the problems that arise from methamphetamine and other substance abuse. However, in rural communities, family support services can be widely spread out and limited. Technology provides an opportunity to close this gap. Gaming provides an opportunity to reach youth. Crossroads leverages both.

The funding, given by the U.S. Department of Agriculture under its Small Business Innovation Research program, will support the initial development of the game, which will be developed by 7 Generation Games and piloted on the Fort Berthold reservation.

7 Generation Games is the maker of a series of video games that combine math and Native American history, developed with members of the Spirit Lake Dakota and Turtle Mountain Ojibwe tribes in North Dakota. The company also has a bilingual line of math games.

In fact, it was the success of those previous games — effectively teaching math in rural, predominantly Native American communities — that led the tribe to contact the company.

“We reached out to them to discuss if it would be possible to apply that teaching through a game to other concepts,” said Circle of Life program director Bruce Gillette. “It can be hard to get kids to talk about or even realize the serious impact of a family member’s addiction. But we think if we can connect with them through a format they are comfortable with, like a game on their phones, we can make it easier.

Crossroads seeks to do just that.

“It was a really forward-thinking approach by the tribe,” said 7 Generation Games president AnnMaria De Mars. “And it is innovative ideas like these that can truly change people’s lives,”

Work on the project has already begun. De Mars and Gillette presented a first-look at the game at the National Indian Education Association convention in Reno, Nevada, on Oct. 5. Pilot testing for Crossroads will begin later this month.