This is an incredible skill I have mastered, I thought to myself as I sat typing away, unfazed, as my oldest child stood crying in the doorway of her bedroom making every effort to be as loud as possible to express her outrage over me sending her to her room for refusing to stop antagonizing her sister. 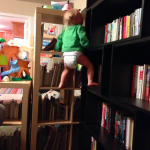 Baby up a bookcase.

Growing up in a household as one of four children and later working on deadline at live sporting events, I was never one of those people who needed (or had the luxury of) absolute quiet to work, but having children has brought to me a higher level of ability to tune out distractions (like someone standing at the doorway determined to scream until timeout ends) and yet still able to react when needed (like when my 1-year-old is crying because he’s climbed halfway up the bookcase, but can’t get down).

It’s not the kind of skill that one puts a resume or that comes up in a job interview, but it certainly gives you a lot more insight into a person than “develop, implement and oversee marketing strategy” or whatever other thing you’re “supposed” to promote yourself as having done. The reality is I employ these “soft skills” as CEO of 7 Generation Games as much as I use any of the soft skills I developed in the professional workplace.

Parents – especially moms – have mastered many of these skills, which is why it is absolutely ridiculous that women are often dinged professionally for having children – less likely to be hired, fewer opportunities for advancement and lower pay. (That’s not even delving into the whole female founders landscape.)

The reality is many of the skills that I’ve developed as a parent have made me more efficient professionally, not to mention harder working, better at problem solving, more capable of compromise and the list goes on.

Work Ethic
For example, one of my best friends is pregnant at the moment. I asked her the other day how she was doing and she said, “Well, I’ve mastered being able to simultaneously write emails and puke.” I think that’s not only an admirable skill, but it tells you something about her dedication to her job.

It reminded me of when I was in grad school and pregnant with my oldest daughter. I had the kind of morning sickness that was literally all day and constant vomit. It was the kind of thing that came on out of nowhere – which was especially inconvenient as I had a 45-minute drive from my house to campus and you can’t just slam on your breaks or pull over on the freeway. As such, on more than one occasion, I threw up in my car while driving, inevitably getting it on myself (despite my best efforts) and still went to campus, cleaned myself up (I learned to keep a second set of clothes in the car) and went on to TA. Seriously, that’s what moms are – the kind of employee that will literally not let projectile vomiting keep them from doing their jobs. 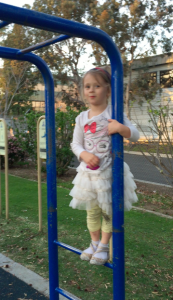 Millie and the monkey bars.

Then there’s the fact that parents are good at weighing data, making decisions and taking quick action. I’m not just talking about like mental math (although math skills are important too!). Case in point, as two weeks ago, we were at my oldest daughter’s softball practice. My 4-year-old was on the monkey bars at the playground when suddenly my 1-year-old made a dash for the parking lot as my 4-year-old started yelling “Help” because she was going to fall. I had to almost instantaneously process the situation and act. I ran for the baby, grabbing him right before he stepped off the curb, then rushed back with him to grab my middle child just before her grip gave out. It was an impressive enough feat that a man later walked across the parking lot to tell me as much.

Negotiation
Parents are great negotiators. Seriously, have you ever tried to get toddlers to do anything they don’t want to? Parenting is 18 years of negotiations per child. “You go to bed half an hour earlier than usual, and you can have Cheetos for breakfast tomorrow,” these are words that have actually come out of my mouth – and as should happen in successful negotiation, both sides felt happy with the arrangement.

Team Management
Have you ever tried to get multiple small children out the door? Compared to that level of coordination any kind of multiple person management is a piece of cake. For starters, employees don’t need you to find their shoes.

Conflict Resolution
Let’s just say here that, before having my second child, I was under the misguided impression that by spacing them out by four years would allow me to avoid the fighting that went on between my sisters and I (there were three of us within four years). I was wrong. Trust me, after forcing your children to settle their difference and apologize to each other 5,000 times, helping Bob in accounting and Susie in marketing settle their frustrations over whatever little dispute is nothing.

What parenting/professional skills have you mastered? Leave them in the comments below!