Skip to content
Home » Blogs » Uncategorized » Things We Know That Are Not So: Lectures Don’t Suck After All

In our developers’ meeting last week, Dave asked why we were using video to teach math concepts when research shows that’s the least effective method of learning. Someone else asked a very similar question this week.

I’ve heard hundreds of times that “research shows” lecturing is a terrible way to learn. I bet you have, too.

This week though, I got to wondering about the data showing how ineffective lecturing is. I received four degrees and I think I learned a fair amount in the process. Most of my courses were lectures and I HATED those classes where we were supposed to “discover” the quadratic equation or some nonsense like that. I thought it was a complete waste of time. Why were we ‘discovering’ something that had been discovered hundreds of years ago? I knew the  teacher knew the answer, why not just tell us how he or she got it? (This is not to say that the world is not filled with people who think differently than me and might have loved that type of learning. For a brilliant discussion of this, I recommend Sheila Tobias’ book, They’re Not Dumb, They’re Different. )

Millions of people in America went through schools, often, all the way through graduate school, where lectures were a primary mode of instructions. I look around at my peers who were taught that way and they don’t all appear to be stupid. In fact, most of them seem to be quite smart and know a lot of things.

So …. I did what I learned in school and tracked down some of that research.

First, there is the meta-analysis by Freeman and colleagues.  In 67 studies that included 29,300 students, Freeman et al. (2014) found students taught through “standard lectures” to be 1.5 times as likely to fail as those taught in an “active learning” format. Pretty definite, huh?

Lecturing was defined as continuous exposition by the instructor, with occasional, unprompted questions from students. So, basically, non-stop talking. 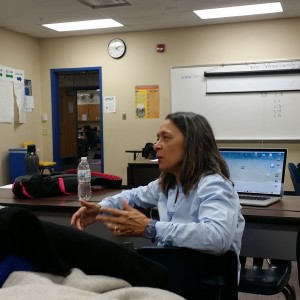 Active learning included at least one of the following: activities, class discussions, group activities, in-class worksheets, problem-based learning – where students are solving a problem in class. Activities could include 10-15% of time devoted to clicker questions. (Teacher asks the class a question to test for understanding and every student clicks on a device that sends the answer. The results are often then shown as  bar graph on an overhead.)

As someone who has taught for 30 years, I would call this ineffective lecturing versus effective lecturing. Instead of lecturing non-stop, you break it up every 20 minutes (in graduate classes) and do something else, have students work a problem in groups, work a problem with student input. You also frequently ask questions to test student understanding, either of students selected at random or having all students “vote”. If you are teaching younger students, you break it up more often than every 20 minutes, more like every 5 or 10. I thought I was just being a good lecturer, but apparently, I was doing “active learning”. Who knew? Not me.

Our games are actually very consistent with this research. We mix video-based instruction with games (some of which also teach math concepts), math challenges, quizzes (similar to in-class worksheets) and occasional tests of knowledge similar to clicker questions, i.e., a student is asked to give an answer and then given immediate feedback on the correct answer.

There is a lot more research on this topic, which I am currently reviewing  while preparing our Phase II application.

My point is that we ALL make assumptions and I’ll bet we’d all be surprised how many times when we look a little closer the truth isn’t at all what we had assumed.