Skip to content
Home » Blogs » 7GenGames » Throwback Thursday: How To Be Amazing

Going through our archives, we came across this great post from October 9th, 2014 “How to be Amazing” that we wanted to share in case you missed it the first time around.

I find it weird when I make people nervous. I’ve had people shake and stutter so much that I thought they had some sort of disability, only to find out later that it was a reaction to meeting me!

My family and friends say I’m intimidating, which I also find bizarre. I am, literally, a little old grandma. 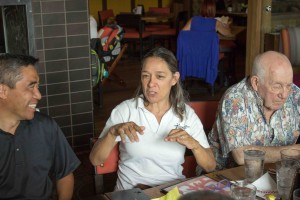 I said this to a friend who responded,

Are you kidding? You’re just amazing! Do you think we forget that you were the FIRST American to win a world judo championship, have a Ph.D. , published a book last year, started a company that made a million dollars in less than two years, then started another company to make games, came out with your first game this year,  published scientific articles. Oh, and you raised four successful kids, one of whom is also a world champion and making movies.

He went on to an embarrassing degree about a lot more stuff. I’m not one of those fake humble-brag people, like the super-models who claim to be “so fat”.

It’s just that …. it’s not like that when it’s happening. Even to me, if I stopped and piled it all up like that, it sounds impressive, but day to day, it’s not really like that at all.

Whether it’s winning a world championship, earning a Ph.D., building a company or making computer games, it’s not amazing when you’re in the middle of it.

For example, I spent the last week fixing up our next game, Fish Lake. I improved the graphics, added gravity so that when a character walks off a hill, it falls down instead of walking around on the air. I added artificial intelligence to make the animals run around at random instead of just stand there. I modified the css  so that the input boxes for the math problems stand out better. All of those are minor fixes in the grand scheme of things. The purpose of the game I was working on is to teach fractions, which are a super important part of understanding math, but if it’s not a fun game, kids aren’t going to play it.

Tomorrow, my day starts with reviewing the quizzes one person wrote, followed by reviewing a PowerPoint and video clip someone else wrote to teach about reading graphs and then testing some software for podcasts.

Hopefully, enough days like this piled on top of one another and we’ll have an amazing game.

It’s just like in my judo competition time, when I trained three times a day, every day. Looking back, winning a gold medal and being best in the world was amazing.

In the middle of it, though, it’s just getting up and working hard all day. Repeat a few thousand times.