Going through our archives, we came across this great post from February 23, 2015 “Quit Making Excuses Not to Succeed” that we wanted to share in case you missed it the first time around.

Like Alice in Wonderland, I often give myself very good advice but I too seldom take it. This is one of those times.

I know I need to suck it up, quit whining and apply to a couple of accelerators. I know that I need to spend less time working on making adventure games, which I very much like to do, and more time meeting with potential investors whose funds would enable us to build out what we’ve envisioned much faster.

Last weekend, my granddaughters were over on Saturday while their mom was at a conference, and on Sunday my third daughter, Ronda, turned 28. This made me realize something … 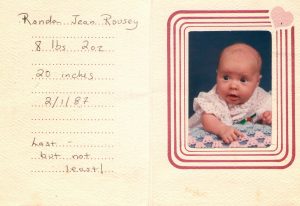 In 1987, I had three children under five years old, including one newborn.  I took one week off from graduate school after giving birth and went back to class. Less than two months later, having polished off my second masters degree, I started on my Ph.D.

So, what is your excuse for not finishing school?

Now, I have to admit that I had an advantage. I was married and my husband made a good enough salary that we could afford a full-time, live in housekeeper. My job as a research assistant covered her pay, and Ron was able to cover all of the bills. I had a fellowship so not only did I not have to pay tuition, but the university paid me.

On the other hand, I had no family within 2,000 miles, I had three children under age five, including a newborn, I was working part-time, going to school full-time and my husband was working 60 or 70 hours a week to support us all. It was exhausting and sometimes it sucked. But then it got better.

Maybe you can’t afford a housekeeper but you have family who will watch your children while you go to school.

One young woman I know earned her masters degree in nursing when she, her husband and their children moved in with her parents to save on rent and child care. After she earned her degree, the family moved out into their own home, with relatively little in the way of student loans.

Let’s recap – she could not afford child care and even with free child care, she couldn’t pay rent if she didn’t work – but she found a way.

My daughter, Jenn, moved back home into her old room at age 22 when I had been hired at USC, back when tuition was free for children of employees. She said,

As much as it will suck to move back home, how many chances am I going to get for an $80,000 education for free?

She could have looked at it this way, “I can’t afford to pay rent if I don’t work and the program I want, a masters degree and teaching credential in one year, going four semesters without a break, is impossible to do while working.”

I know she was exhausted a lot and broke. Plus, her friends were out living in their own apartments, getting married, going on vacations. It sucked. And then it got better.

There may be situations where it is impossible to better your situation – held captive by ISIS, for example – but I think those situations are really, really rare.

Before you start telling me that I have no idea of how difficult life is, living in my townhouse by the beach, let me just point out to you this – I left home at 15 – an age at which I wouldn’t even let my children stay out past 10 p.m. It totally sucked. And then it got better.

So, now I have convinced myself. Tomorrow morning I will get started on those accelerator applications.