Going through our archives, we came across this great post from January 21, 2014 “What’s Really Needed for Date Science, Start-Ups & Life” that we wanted to share in case you missed it the first time around.

There’s been quite a bit of discussion on twitter lately regarding generalists versus specialists. This article on KD Nuggets reported an even split in their poll numbers regarding whether companies try to hire a generalist who has knowledge of all areas required by a data scientist, as opposed to those who said that they hired a team of individuals, each one with some of the skills.  In case you are wondering, the required skills were:

There was even some discussion as to whether the Data Scientist possessing all of those skills is indeed a mythical creature like the unicorn. (This irked me somewhat because it is not the first time I have been mistaken for a unicorn. Not only do I possess all of those skills, but I am also a Hispanic grandmother running a start-up. ) 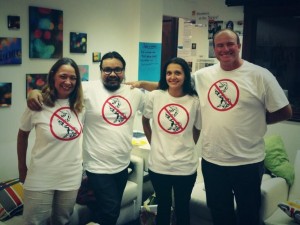 This is NOT, however, a post about my awesomeness but rather about the value of both generalists and specialists even in a small business.

I highly recommend reading this Wired article by Samuel Arbesman, Let’s Bring the Polymaths – and the Dabblers – Back . I do agree with many of Arbesman’s points. Universities are NOT the bastions of innovation that they like to believe. Although some innovators may start at universities, they almost invariably leave. There are multiple reasons. One is, as Arbesman notes, is that universities demand specialization. You are a professor in a specific department and specialize in middle school mathematics education. You publish articles in journals on middle school mathematics. If you have an idea for a computer game, well, that is the computer science department. If you think it would be cool to have an adventure game that is set in a historically accurate pre-European contact North America, well, the History department or Native American Studies are where you do that.

I completely agree with Arbesman that both video games  and start-ups are stitching together diverse areas of specialization, and he describes our start-up , 7 Generation Games, pretty well.

The part where I disagree is with some people who seem to think that we would be better off to replace specialists with generalist. True, if I had to pick one or the other, it would be the generalists, and, as I wrote on the 7 Generation Games blog, I am about half of our development team currently, as well as CEO, and, despite the doubters, it suits me.

However, even as a small company, I think our strength is in having both generalists and specialists. I am pretty good at statistics and programming, know enough about databases and quite a bit about mathematics education and teaching in disadvantaged communities. I’m a good writer and I can give presentations at conferences and pitch at start-up events.

However, again, we have The Invisible Developer who is an amazing programmer and even more amazing still, quite modest about it. He has been referred to by friends and family alternately as Code Warrior, Computer God and The Rocket Scientist (now retired). Almost all Dennis does is software development, with the occasional pitching in on tech support.

Ernie does technical support. He may pitch in to do some video editing or game testing in a pinch, but mostly he does tech support from one end to the other, testing compatibility with different operating systems, answering user questions, maintaining the tech support site, writing documents for tech support.

Maria does marketing. Both Erich and I have presented at conferences, Dennis or I might blog about what we are doing, but overall whether it is making slide decks for investor pitches, a one-sheet to distribute at conferences or selecting which incubator application to submit and when to pass, it’s Maria’s call and her work. Again, she can review contracts, do voice over for video or pinch-hit in other ways, but mostly, she’s writing, blogging, tweeting, meeting and organizing all of the aspects thereof.

Marisol is probably the only real generalist in the company – she does everything for powerpoints for presentations to mailing packages to making Easter egg movies that pop up in the game.

While Erich is mostly providing cultural expertise on Native American history, meeting with the schools to coordinate testing and advising on how to improve the game for the school sites, he also does some editing and presenting at conferences.

Then there are those who are strictly specialists – Justin and Gene do artwork, Danny does animation. The rest of us may crop an image now and again or animate a character across a page as a sound plays, but we are no artists and we know it.

We need generalists – Maria and I meet weekly and try to scope out where we are, where we’re going and keep all the pieces together. On the other hand, without the specialists – people like Dennis who will spend two weeks on trying to get the water in the game flow like real water, or Erich who will drive to Belcourt to get someone to record a story so that the grandmother talking sounds like a real grandmother from Turtle Mountain – our game wouldn’t be nearly as good as it is and I don’t believe our company would be nearly as successful. 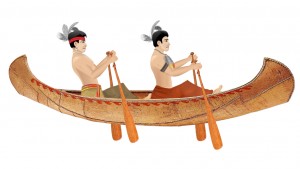 Artwork not by me, thank God