At 7 Generation Games, we try to teach you about the different tribes that are featured in our games. We’re all about fun and games, but you also have learn a little bit in the process!

One of the tribes we’ve talked about is the Ojibwe. The Ojibwe are featured in our games Fish Lake, Making Camp and Forgotten Trail. During Making Camp one of the challenges is to build a wigwam, which you do while learning about math and social studies. But, what in the world is a wigwam?!

A wigwam was a type of shelter made from sapling logs and then covered with bark. 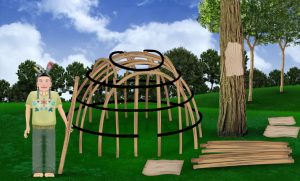 The male tribe members were in charge in creating the wigwam frame. They would search for saplings (young trees) that were anywhere between 10-15 feet long. Saplings were pliable (or bendable). Once they had cut the saplings, they would draw a large circle (10-15 feet in diameter) on the ground and place the saplings around it. The saplings had to be “an equal distance apart, bent toward the middle and tied together to form the arched frame.”

Then, the female members would cover the frame. Traditionally, Ojibwe wigwams were covered in birch bark sheets. When gathering the birch bark, they had be mindful not to take too much bark – otherwise, they risked killing the tree. The covering material depended on the regions a tribe lived in and the resources available. Some had birchbark, others had grass, bushes, reeds, hides, etc. Once finished even the smallest wigwam could be anywhere from 8-10 feet tall! (That’s as high as the average ceiling in most house.)

Wigwams could be insulated with hides, brush, even a mud-like layer of dirt in the winter, to keep the homes warm during long, harsh winters. 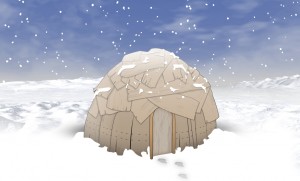 Some wigwams were wholly fixed shelters, and others had elements that were portable. If the Ojibwe family moved, they would simply remove the hide and take it with them to the next stop. The frame would stay for when they would return. If the frame was no long there when they returned, they’d just start all over again and build a new one.

Now, a VERY important note- a wigwam is NOT a tipi. Again, a wigwam is NOT a tipi. Some Ojibwe did live in tipis. Tipis are made of hide that is layered over long poles, this makes them easier to transport. The Ojibwe in the Great Plains areas were more nomadic so a tipi was easier to break down and take with them. The Ojibwe in the woodlands lived in villages of wigwams.

We hope that clears things up for you and all your wigwam concerns and confusions can be put to rest.