As  you may have heard, I will be heading to Santiago in about a month to be part of Startup Chile, where I’ll be expanding our line of bilingual games for the Latin American market. First on the agenda is to do a Latin American version of Making Camp. The original Making Camp and now Making Camp Bilingual were based on stories from North American history, specifically the Ojibwe people who lived in what is now the U.S. and Canada. 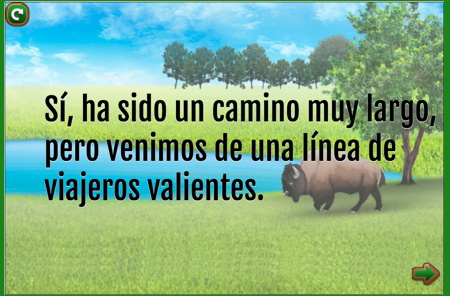 I want to add some games specifically for Chile but I don’t want to go TOO far before I consult with people from the country, which is what I will be doing in Santiago. However, there a couple of things I do know and that is that Chile is noted for its mountains and that some form of a game called Snakes and Ladders has been around for centuries.

Before he left us to pursue big bucks in the corporate sector, Luis had started a version of this game that never got finished, so I took it over, added a BUNCH more code and created a game I’m calling caves and ladders. (I did look it up and Chile has some really cool caves.)

There is a LOT more to creating even a small part of an educational game than most people realize. Let’s just start with the design part.  For a board game like this, modified to play on a screen, you need to design the game board to start. 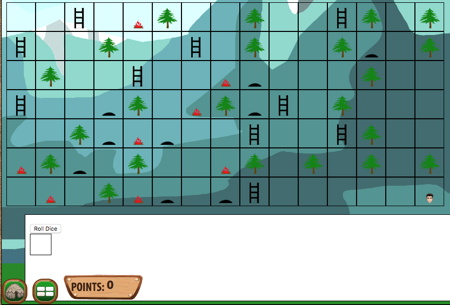 So, here we go. Our game piece, the character I picked, is in the bottom right. The goal is to get to the top left and go sledding down the mountain. My program is going to need to fulfill several functions:

I’m almost done with this game. I think it can be done in under 1,000 lines of code or thereabouts. While it had not been my original intention to create a single page web application – this is going in as part of  a much larger game – I realized that this could be really easily packaged that way, so I’ll probably do that next week.

If you want to follow along on the design portion, read the next post. After that, we get into the coding.

Speaking of Latin America – learn Latin American history and statistics while playing Aztech: The Story Begins in English or Spanish. Free. For your iPad.