Halloween is the time of year when people dress as something other than what they are. It’s only a few days away and you probably want to keep all eyes on you and impress everyone at the Halloween Virtual Party you’re planning to attend. But wait a second, is your costume appropriate?

Cultural appropriation is when someone, usually of a privileged socioeconomic background, borrows elements from oppressed groups who have been historically marginalized. One of the groups whose culture is often appropriated during Halloween is Native Americans. Appropriators are  — intentionally or unwittingly — contributing to the oppression Native people face daily throughout the country.

Dressing up like another racial group for Halloween is just wrong. It’s especially wrong to dress up like a Native American considering the mass genocide of Indigenous Americans during the time of the United States’ founding and considering that Native Americans, according to NPR, continue to experience discrimination on an exceptionally high level.

The games below were all developed with the tribes featured and teach Native American history. Here is an interesting fact for you, though. When we piloted these games at schools with predominantly Native American students, the students liked them a lot and their math scores went up. However, a frequent request was games with a more contemporary story line. So, we developed Forgotten Trail based on Ojibwe history and AzTech: The story begins , with contemporary characters learning Mayan history. Native American Heritage Month is in November so we’ll have a lot more to say about this topic in the next few weeks. Stay tuned.

If you really want to honor Native Americans, then you should learn about their culture.
Check out our educational video games that teach math in a history setting such as Ojibwe (Chippewa) history and more. 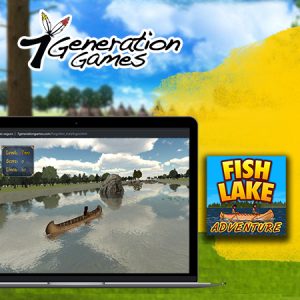 Get Fish Lake for Windows, Mac or iPad

In Fish Lake, players practice with Fractions while learning math problem-solving strategies. They’ll also be introduced to Native American history. Watch out for poisonous snakes! Canoe through the rapids. Find enough food for your village’s survival. Figure out “what’s fair.” Who knew you could get this excited about fractions? Recommended for grades 4 and up.

In Spirit Lake: The Game, players learn how to solve multiplication, division and geometry through word problems set in the context of a stories based on the history and culture of the Dakota people. Save your tribe from attacks and a spreading epidemic by solving math problems while escaping rabid wolves and hunting buffalo. Math has never been this fun!

Recommended Grades 4- 5
Math: Division
History: Lakota , Plains Indians
In Lakota and English
Learn how the Lakota lived. Experience the Lakota language. Improve math skills. In Making Camp Lakota, players practice multiplication and division skills. They’ll also be introduced to Lakota history and culture. Earn points by solving math problems and answering social studies questions in the village-building simulation game as you earn items to customize your tipi. Created with the Thunder Valley Community Development Corp., Making Camp Lakota is the the FIRST fully English/Lakota bilingual, cross-curricular math video game.  Language of instruction is controlled by the player on every screen within the game, including text, audio and video content. It can be played in English, Lakota or flipping between the two. It is the second bilingual game in our Making Camp series. Whether you are a Lakota speaker, a Lakota language learner or hearing Lakota for the very first time, Making Camp Lakota has something for you!