If you read the first post, you know the task was to create an activity where a player answers math problems and earns math items for the farm.

The purpose of these first four posts was to create a page that looks like 5 (or 10) pages but is actually only one page switching out the images, text and audio. That makes it easier to maintain a game with 200 pages than 1,600.

These four pages are the “story” part of the activity.

After this, we’ll move into the math problems and getting things for the farm.

After we have run through all of these parts separately, I’ll show you how to put them together for a more complex, way cooler program.

That’s how I always write code. Make it very simple and working, then make it more efficient.

If you follow this whole series you will be a pretty proficient javascript programmer by the end.

All right, here is the HTML and CSS

As you can see, the css is contained in the head tag, before the body. The element with the id ‘sceneimg’ is placed 160px from the bottom. This gives her initial position, but as you saw in the third post, she moves around. This isn’t true animation. That will come up in other posts in this series.

And that’s it for the css specific to this page. Now, sad fact, if you copied and pasted the code exactly below, it would not look like my example. 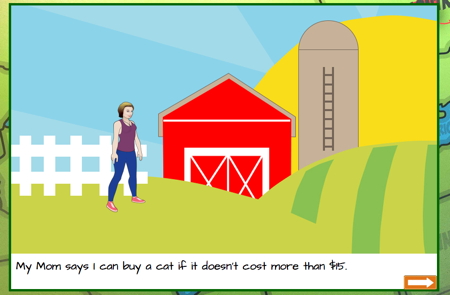 The stylesheet linked to this page:

.. has styles that are used over and over. These include the font used, background image for the body, location of the element with the id “next”, the background of the next arrow turning black when you hover over it and much more.  We’ll cover style sheets in another post.

NOTICE THAT ALL OF THESE IDS ARE REFERENCED IN EITHER THE CODE OR CSS. A common mistake novice programmers make is changing the id to something more ‘descriptive’ or original, or deleting it altogether if it seems unnecessary.

Since sceneimg, scenetext, words, etc. are all referenced by that id in the code above (above in the program, shown in previous posts on changing the audio and switching scenes and on changing the scene elements , if you change the ID or delete it, the code won’t work. Sometimes, you may not see an id referenced anywhere in the code or CSS on a page but it is required for CSS or Javascript in an external link. In short, don’t delete or change anything in a program without testing it to see if it still works as expected.

Come back next time for a dive into

If  you’d like to see the game where this activity pops up, you can buy Forgotten Trail here for $4.99 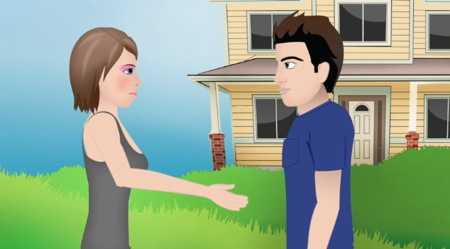